I’m not sure if I’d already mentioned that the fuel filler cap for my Lister D was a jam jar lid. Yes, that’s right a jam jar lid! The tank has a wider automotive style (be it car or motorbike?) filler spout and one that fits a bayonet style cap.

The home made fuel cap!

Presumably the original cap had been lost, because the jam jar lid (I’m assuming here it’s jam, it could be marmalade or pickled onions for all I know!), has had a thin strip of steel tack welded inside to secure it to the tank opening.

The D-types I’ve seen from a similar vintage have a screw on brass cap and fitting, which is smaller than the opening in my tank. Obviously this must be some kind of back yard repair job. Having said that, the tank (apart from the dents) is in very good condition and doesn’t look like a 75 year old fuel tank. I suspect it is a remanufactured part that has had a car style filler spout and cap fitted in the absence of an original.

Hence I hunted around for a spare, looking for something for a car or motorbike that would fit the wider opening and have a bayonet fitting. Yet again, good old ebay comes up trumps with a replica brass filler cap being sold as a replacement part for a Royal Enfield motorcycle. It came all the way from India (where motorcycles are still made under the Royal Enfield name), for £10 including postage. 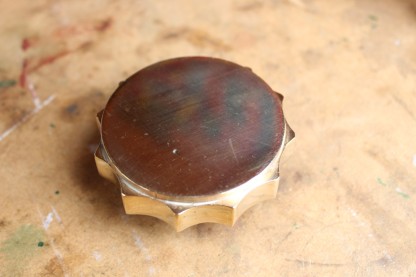 It needs a bit of a polish up, but it will look a lot neater than a flimsy old jam jar lid! Having previously carried out some more filling of a dent in the fuel tank and given it another rub down and clean, it was time to apply some more of the good old Mid-Brunswick green paint.

Once the tank and the tank straps are dry, I can fit them to the engine and connect the fuel pipe from the tank to the carburettor. Once that’s done, I’m just then waiting on the magneto, before I can have a go at firing the engine up! The end is in sight, but there are still a few bits and pieces to do.

It has taken me nearly three years to get to this point!